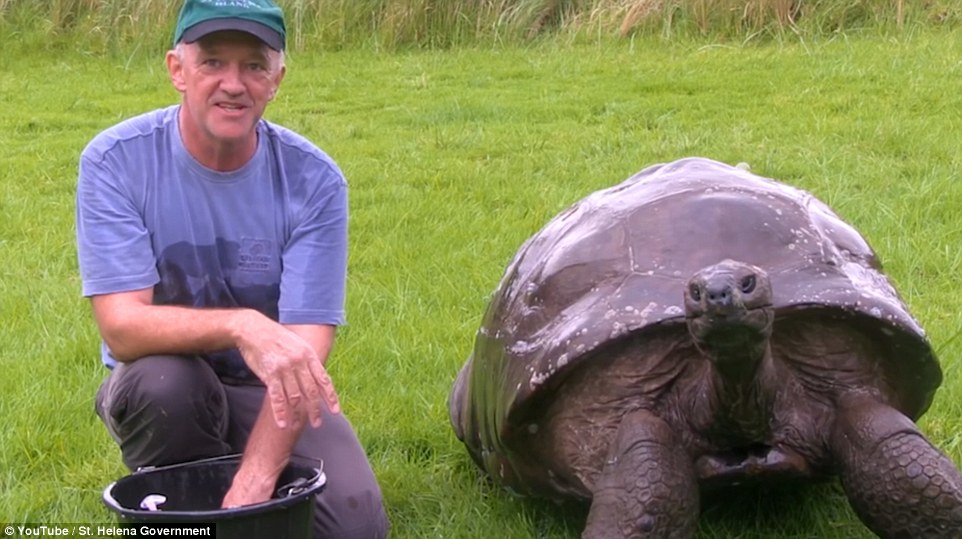 Decades of grime were scrubbed off Jonathan the giant tortoise, ahead of a royal visit to the island of St HelenaSurgical soap was chosen as it is not caustic and soft brushes and a loofah were gently used to avoid damage The 45in-long tortoise arrived on the island as a gift to the governor from the Seychelles in the late 19th century. 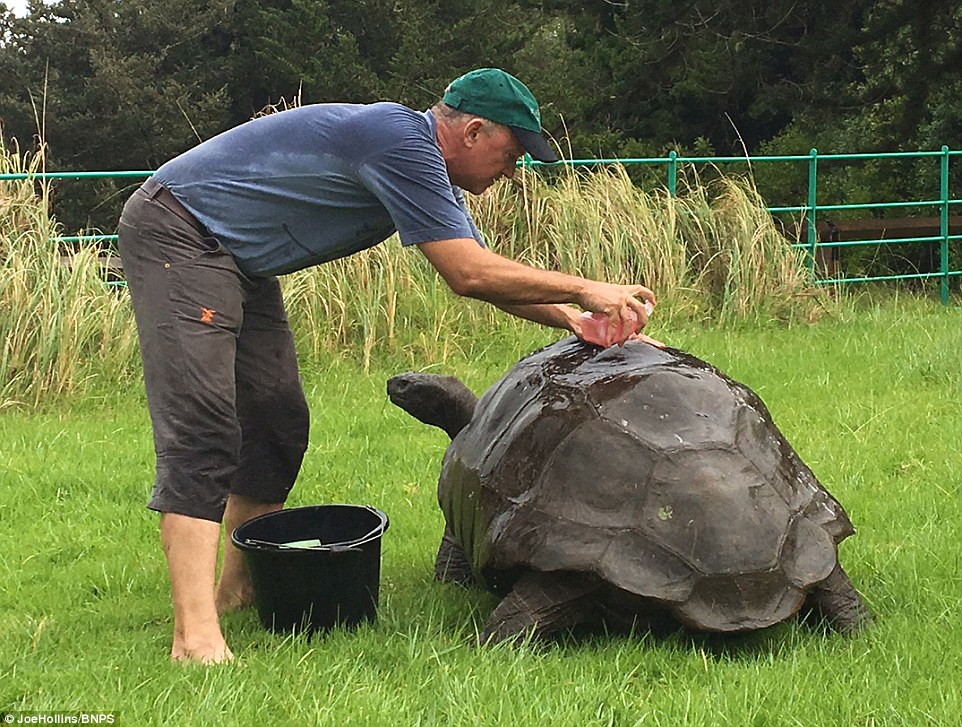 The world’s oldest living animal is starting over with a clean sheet at 184 years old – after a vet gave him his first ever bath.Jonathan the giant tortoise has come out of his shell after centuries of grime were painstakingly scrubbed off his back with a loofah, soft brush and surgical soap.Dr Joe Hollins, the vet for the British outpost of St Helena in the south Atlantic where Jonathan lives, decided to give him a spruce up ahead of a royal visit in a few weeks’ time. 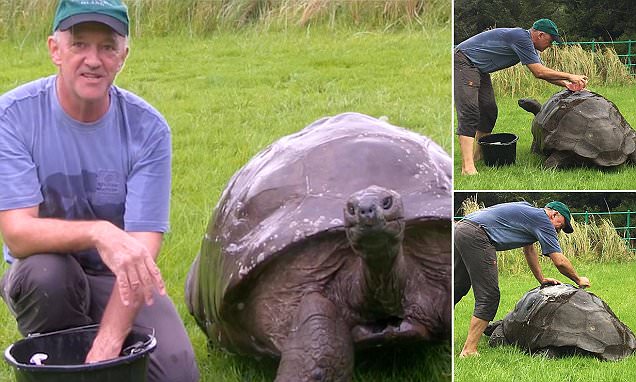 There was no medical reason for his hour-long soak but it was done ahead of a visit by an unknown royal to the tiny island of St Helena in May for the dedication of the new airport.

The spring clean comes months after Jonathan, who was aged 50 when he arrived on the historic isle in 1882, was placed on a special high calorie diet as it was feared his health was on the wane.

He carefully scrubbed each of the segments of Jonathan’s shell, known as scutes, and removed black sludge and bird droppings while the tortoise sedately chewed on grass.

Dr Hollins, 58, believes it is Jonathan’s first ever bath.

He said: ‘In the past Jonathan’s keepers had a rather laissez faire attitude to the tortoises on St Helena and so this is probably his first wash in 184 years.

‘We gave him a good scrub as we are expecting a royal visitor who is going to meet him so we want him to look his best.

‘He looks so much cleaner and he seemed to enjoy the whole experience.

‘Jonathan stood like a statue when I was washing him, I don’t know whether that was the vibrations he found soothing or he was thinking “at last, I’ve had my first bath!”

‘I just had a bucket of water with some surgical scrub and used the loofah and a little brush and just slowly cleaned him, it was pretty tiring.

‘He doesn’t look any younger, but he does look different. He is much paler and you can see the rings on his shell have almost completely disappeared.

‘He had black deposits on his shell that came from wear and tear. As far as I could see his shell is in great condition for his age.

‘Hopefully he won’t have to wait another 185 years before his next bath.’

Jonathan, who is 45ins long and can stand up to 2ft tall, arrived on St Helena as a gift to the governor from the Seychelles.

In his time on St Helena he has seen 28 British governors come and go. Eight British monarchs from George IV to Elizabeth II have been crowned during his lifetime and 51 British Prime Ministers have served at 10 Downing Street.

For those keen to see Jonathan happily plodding around the Governor’s house, private tours have been arranged in the past.

He currently shares his enclosure with four other giant tortoises – David, Emma, Frederika and Myrtle.

Although he has lost his sense of smell and his eyesight is fading, Jonathan is said to be in good health.

Dr Hollins, 58, now has to take his loofah to the other tortoises and some of them are dirtier than their elderly friend Jonathan.

Following the death of Harriet, a 175-year-old giant Galapagos Land tortoise, in 2005 in Australia, Jonathan has been recognised as the world’s oldest living land animal.

St Helena was chosen as the place of Emperor Napoleon’s second exile and the French dictator died there in 1821.