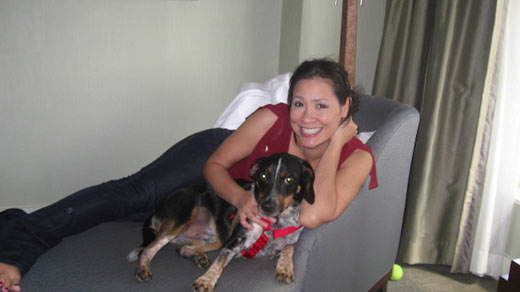 More and more couples getting divorced are battling over their pets. One woman in Charlottesville spent years in mediation working out a deal on how to split time with their little beagle mix.According to a survey, 22 percent of attorneys say they’re seeing more courts allow pet custody cases and 20 percent say more courts are considering pets an asset during divorce cases.For some couples, however, the battle is more emotional.“People say all the time that your life changes when you have a child and this has been the case in my experience adopting Pupineya,” says Formosa Hsu, battled for pet custody.Hsu and her ex-boyfriend adopted Pupineya from Chris Kirtley, a dog rescuer, in 2008. “It really wasn’t but a few weeks after they had brought him home that they split up,” says Kirtley.Immediately, custody became an issue. “It involved us withholding the dog, the dog getting kidnapped over international borders and finally, we found a mediator named Debra Hamilton,” says Hsu.After two years in mediation with weekly video sessions Hsu and her ex came to an agreement.“Today we share custody each six months of the year, in Charlottesville, and then six months in Vancouver,” says Hsu.“The beauty in mediation is that the custody is viewed in the same format that it would be for a child and you’re not looking at a boat or a car that you’re awarding to one person or the other,” says Kirtley.A study by the American Academy of Matrimonial Lawyers shows 27 percent of attorneys have seen an increase in the number of couples fighting for pet custody in the last five years.“As society changes, people are not always getting married these days or having children so the pets kind of fill in that void,” says Hsu.But when couples split, who pays?“The difference between our range of pay is very vast and to pay for the international transfers is very expensive and also healthcare costs and so on and so forth,” says Hsu.Hsu and her ex found a way to split those costs. “We have a sliding scale of appropriate percentage to pay based on what the earnings are of each party,” says Hsu.Attorneys say dogs are the most commonly disputed family animal– making up 88 percent of the pets fought over. Cats come in second with 5 percent. Then there are a whole host of other pets that have been fought over including pythons, parrots and a 130 pound turtle.