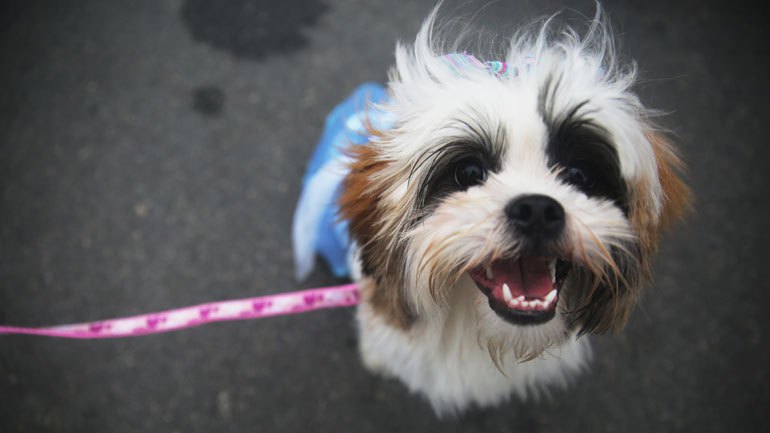 PITTSBURGH (KDKA) – Pet owners are always looking for something to help their animals live a longer, happier, healthier life. it’s a real bonus when it is cheap and easy to give.Mike White and his wife, Laura, loved their first Shih Tzu, Kosmo, so much, they got a second one and named him Vinny.Mike had one growing up and when an elderly family member offered one to them, he and Laura jumped at the chance.“They are very gentle. They obviously are small and they are easy to pick up, friendly, they love to play, energy. I mean they are just great dogs,” Mike said.That was eight years ago. But, a couple years ago, 10-year-old Kosmo started having problems eating.“We figured OK,” Mike White said. “We know he is getting older, but we didn’t think it was common for him to have such digestive issues every day.”So, he and Laura took their dog to Animal General Hospital in Cranberry Township.Laura said the problems were obvious when they fed him.“He had been having some issues eating, and he wasn’t able to keep his food down, and he was just kind of lethargic and lazy and not being himself,” she said.Their veterinarian, Dr. Mike Hutchinson, immediately suggested adding probiotics to Kosmo’s food.“Ninety-five percent of the pathogens or disease-causing organisms come through the gut — through the mouth. Not through the skin. Not through the respiratory tract, but through the gut so it’s important — it’s vitally important — that we have good balance,” Dr. Hutchinson said.Probiotics for dogs are bacteria in a dry powder that is sprinkled on the food. When the dog eats, that good bacteria is swallowed and ends up in the large intestine, where it balances the harmful bacteria that is causing problems. Hutchinson says it is very different than putting your dog on antibiotics.“Antibiotic is anti-life — basically it is trying to kill cells, and that’s what it is trying to do,” Hutchinson said.Antibiotics target certain cells or organisms in the dog’s body and eliminate them. One the other hand, Hutchinson says, “the probiotics are pro-life. They are trying to repopulate the good bacteria, the army of good guys if you will so that we don’t need the antibiotic.”Hutchinson recommends probiotics for all kinds of animals — dogs, cats, even exotic pets like chinchillas. He prescribes them to help with chronic bowel issues, bad breath, bad gas and loose stools.“My daughter got a new puppy and I told her have (Purina’s) FortiFlora on hand,” Dr. Hutchinson said.  “I told her if that dog gets diarrhea, give it for seven or eight days. Repopulate the bacteria. Don’t call me. It will probably get better with you just giving this probiotic.”Within a couple weeks of starting Kosmo on probiotics, the Whites saw a huge difference in his health and behavior.“He’s able to keep his food down a lot better and he’s just a lot more active and energetic. He’s able to keep up with Vinny,” Mike said.“We have seen such an improvement with Kosmo that he is like a young pup anymore. I noticed that since we started him on it on that, I think it was the best decision we have made,” Laura said.From the looks of things, Kosmo seems pretty happy about it, too.Dr. Hutchinson said if your pet is healthy and on a good diet, there is no need to give your animals probiotics every day. He said feed the probiotics for a couple of weeks once a quarter to keep your pet’s system in balance.Remember , probiotics are specific to your pet — meaning what you feed to your dog is different from what you would use for a cat and different yet for other exotic creatures because the bacteria in every animal’s digestive track is unique.As for the cost, it averages about a dollar a day, $15 a quarter or $60 a year.