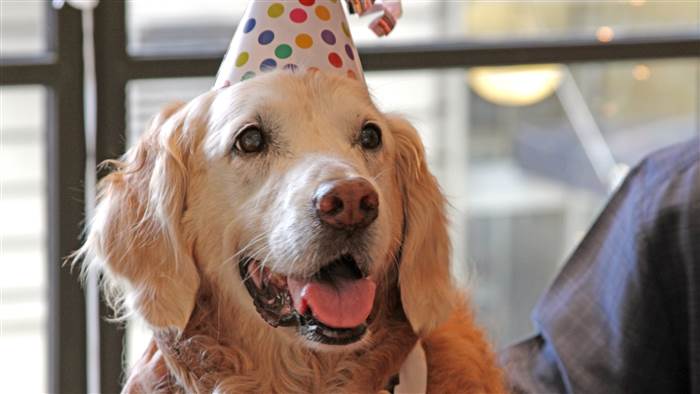 In human years, Bretagne is more than 100 years old — but she acted like an exuberant puppy at an epic Sweet 16 birthday bash thrown in her honor in New York City.Bretagne (pronounced “Brittany”) is the last known surviving search dog who worked at Ground Zero after the Sept. 11, 2001 terrorist attacks. This year, as Bretagne’s 16th birthday approached, New Yorkers decided to come together and do something unforgettable for her.BarkPostBretagne, the last known surviving 9/11 search dog from Ground Zero, enjoys a 16th birthday party held in her honor in New York City.During her daylong celebration, the golden retriever reclined on soft beds at a classy Central Park hotel, ate a gourmet burger, rode around in a vintage New York City taxi, frolicked at a doggie splash park, 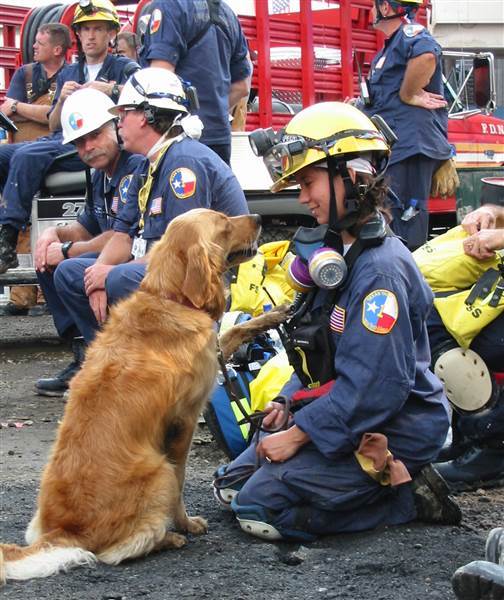 played with oodles of new toys, donned a birthday party hat and inhaled a dog-friendly cake in a matter of minutes. Through it all, she wore a blissed-out smile on her furry face and relished all the attention and affection she was getting.”There are so many reasons Bretagne’s story is special, but this one really hit home for BarkPost since we are based in New York,” said Laura Hartle, creative producer for BarkPost Video, which coordinated the celebration in late August. “To be able to have the chance to thank one of the dogs who helped our city when we needed it most was an unforgettable experience.”BarkPost — the publishing arm of Bark & Co., which offers monthly BarkBox subscriptions for dogs — has an ongoing video series called Dog’s Best Day that aims to give deserving pooches the best 24 hours of their lives. In Bretagne’s case, that day included an illuminated billboard in Times Square and the dedication of a cobblestone in her honor on the plaza of the 9/11 Memorial.BarkPostBretagne the dog and her human family were greeted in New York City’s Times Square with a billboard featuring messages of welcome and gratitude.”It was really surprising and very touching to see how many people were involved and excited about her coming back to New York,” Bretagne’s longtime handler and owner, Denise Corliss of Cypress, Texas, told TODAY.com.

“Of course, it’s not just about Bretagne. It’s about the love and support that New York showed for those who responded to 9/11. She’s kind of a symbol of that.””People we met on this trip were very emotional and very nice to us,” she said. “People were hugging her, and some were crying.”BarkPostNew York residents were elated to meet Bretagne upon her arrival in the city.Bretagne made national news last year when, at age 15, she returned to Ground Zero with Corliss for the first time since the 2001 terrorist attacks. NBC News’ Tom Brokaw interviewed Corliss at the 9/11 Memorial and also spent time with Bretagne, who was a 2014 finalist for the American Humane Association’s annual Hero Dog Awards.During that visit, Corliss cried as she beheld the 9/11 Memorial’s enormous waterfalls and reflecting pools, which are surrounded by bronze panels bearing the names of the nearly 3,000 people killed in the attacks.Courtesy of Denise CorlissDenise Corliss is pictured with her search dog Bretagne at Ground Zero in New York City in September 2001. It was their first deployment together.”Seeing this kind of took my breath away a bit, similar to how the pile was the first time I saw it,” Corliss said at the time. “It’s so calm and peaceful now, unlike the chaos of before.”RELATED: 9/11 search dog from Ground Zero still lends a helping pawCorliss found herself wiping tears away again during this year’s much more relaxed trip to New York. Her husband, Randy Corliss, 49, said he could tell how grateful his wife was.”When they had us look up at that big display (in Times Square) and we saw those beautiful pictures presented up there for Bretagne and Denise, I thought, ‘Uh-oh! Here comes squirt time for Denise,'” Randy Corliss said. “It tends to happen at this time of year.”share link9/11 search dog trainer: Memories ‘still vivid’PLAY VIDEO