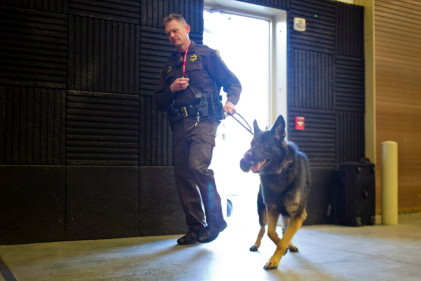 (AP Photo/The Grand Rapids Press, Joel Bissell)AUSTIN–Grieving dog owners told House lawmakers Tuesday that animal training for police could have prevented the deaths of hundreds of beloved pets across the state.“This training is mandatory for UPS and FedEx delivery men, why isn’t it for law enforcement?” said Cheri Scholz, who lives near Amarillo. Her 8-year-old blue heeler, Smokey, was fatally shot in 2012 by a police officer responding to a loose dog report.Smokey had escaped from her yard. The responding officer attempted to get the dog in his car, but Smokey darted away, Scholz said. Neighbors who witnessed the event told Scholz the cop then shot and killed the dog, she said.She questioned the local police chief, who told her the department’s policy was to shoot a dog that showed aggression, she said.The House Homeland Security and Public Safety Committee on Tuesday considered two of three bills filed by North Texas representatives that would require cops receive training for encounters with animals. The bills were left pending.The proposal emerges as controversial dog shootings have grabbed headlines. Since 2009, Texas cops have shot more than 400 dogs, according to data collected by the animal advocacy group 4 Keeping Our Pets Safe.Law enforcement representatives told lawmakers the training—a course that teaches cops how to deal with aggressive dogs and read an animal’s body language, among other things—could prevent officers from being attacked and save families the grief of unnecessary shootings.“Canine encounter training will help fill this void and provide officers with effective options and valuable knowledge to use when we come into contact with dogs while performing our regular duties,” said Amy Knoll, assistant chief for the Cleburne Police Department.One of the bills, authored by Rep. Helen Giddings, D-Dallas, would require all officers to receive training in encounters with animals. Another, authored by Rep. Nicole Collier, D-Fort Worth, would focus solely on dogs and require new officers and officers seeking promotion to complete a 4-hour training program within two years.The Texas Commission on Law Enforcement would establish and require the training. Departments would absorb the cost of training.Committee chairman Rep. Larry Phillips, R-Sherman, who appeared receptive toward the bill, indicated his preference for a final version of the bill to include training for a variety of animals, not just dogs.Phillips and Rep. Tony Dale, R-Cedar Park, also inquired about offering the course online instead in an effort to reduce costs, particularly for smaller police departments in far-flung parts of Texas.“There are a lot of financial costs to training like that, where there’s travel and everything else, so I think something we’re all going to have to think about,” Phillips said.Dog shootings by policeYear 2009 2010 2011 2012 2013 2014# of dogs shot 40 59 66 94 84 114Source: Data from 4 Keeping Our Pets Safe