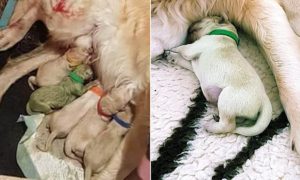 FROM JOHN JEFFAY AT CASCADE NEWS LTD 0161 660 8087 / 07771 957773 john@cascadenews.co.uk.. CASCADE NEWS FOR NORTHERN TIMES.. .. PIC SHOWS – RIO FEEDING PUPS.. .. A dog owner got the surprise of her life when her golden retriever gave birth to a green puppy… Three year old Rio have birth last week to nine puppies but when one came out mint green Louise Sutherland was gobsmacked… The extremely rare occurrence which is thought to have happened only three times before in the world is caused by a bile pigment called biliverdin that is found in the placenta of dogs… The substance can stain the puppy¿s coat when it mixes with the mother¿s amniotic fluid ¿ the liquid that protects and nourishes the pup… Mrs Sutherland from Golspie in the Highlands has now named the pup Forest in recognition of her unusual shade.