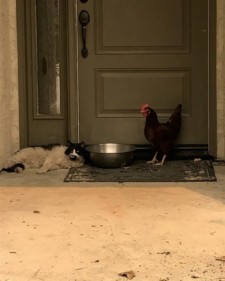 The wildfires ravaging California are growing increasingly severe, with the Mendocino Complex fire recently becoming the state’s largest on record.

But in a small story of hope, a pet chicken and a cat found solace in each other during one of the blazes last week — and were recently reunited with their owners’ families.

“It really was an inferno,” Jennie Sierra, owner of Whiskers the cat, told TODAY through tears. Whiskers has burns on his paws from the heat that emanated from the ground during the fire, and is currently visiting a local animal hospital daily to get his bandages changed (many of his whiskers were also singed off during the ordeal).

Firefighters found the strange bedfellows “huddled together for safety and support,” according to a Grass Valley Fire Department Facebook post, after surviving the deadly Carr Fire in Shasta County.

Evacuations of the Bay Area were ordered after the Carr Fire doubled in size between June 23 and June 26, ultimately consuming more than 163,000 acres (45 percent contained), according to the California Department of Forestry and Fire Protection.

The Grass Valley Fire Department sent a response team in the early hours of June 26, though the fire was about four hours north in Shasta County, according to representatives for the city of Grass Valley.

On the second day of fire response, while working to clean and surveil fire damage, the team stumbled upon the pair of animals in the doorway of a home. The crew responsible for rescuing the animals is still currently involved in managing the incident, Grass Valley Fire Chief Mark Buttron told TODAY via email.

The firefighters coaxed the chicken and cat into an animal carrier, where they gave them water and kept them together until they arrived at Shasta County’s Haven Humane Society. Once examined there, the animals were transferred to the VCA Asher Animal Hospital in Redding, California, to receive further medical attention.