Can Your Pet Go Blind from the Solar Eclipse?- PetsOnBoard.com

Categories: News Pet News pets petsonboard
Comments Off on Can Your Pet Go Blind from the Solar Eclipse?- PetsOnBoard.com 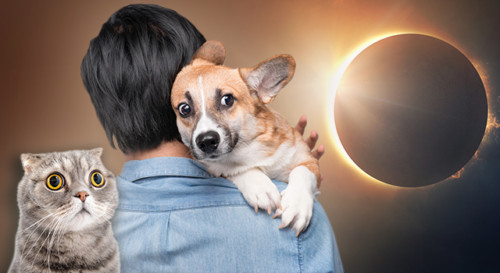 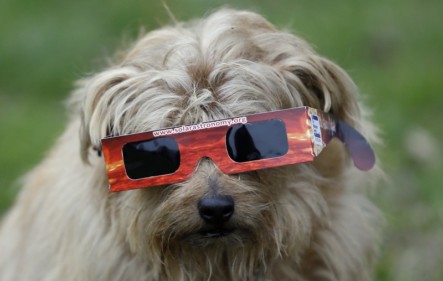 If you have plans to watch the total solar eclipse that will cross the United States on Aug. 21, you likely have a long checklist of things to do. For example, you’ll want to buy special protective eyewear and plan a way to beat traffic as hordes of people travel toward the path of totality. But should that checklist include securing protective glasses for your pets? Animals will probably be fine, as they don’t tend to look directly at the sun. But it doesn’t hurt to be safe and protect cats, dogs and other animals.

Pets may still become fearful during the eclipse.

Dogs are among the most affected household animals during eclipses. During a major eclipse in 1932, the Boston Society of Natural History recorded data suggesting around half the nation’s pet dogs were emotionally affected. For most dogs, this meant they became quite frightened, though some terrified pups went as far as trying to hide from the eclipse. So, during the eclipse, give your dog a little extra love and take measures to ensure they don’t try to run away. If you head outside, keep your dog on a leash.

Unlike dogs, cats are known to keep their cool during eclipses. Research from the 1970s found most cats simply took the opportunity to have a nap, while a few meowed in confusion. Generally though, you can expect your cat to be just fine.

“It’s sort of like the Fourth of July, but tripled,” said Nelson. “We are going to have concerts, people shooting off fireworks in the dark of the midday sun, loud noises and strangers.”
Just as you do during firework holidays, make sure your pet is either safe inside for the eclipse or on a leash and under careful watch.

“Safe solar viewing is always a must, no matter who it is,” Reynolds said, showing a photo of a dog wearing protective glasses.

But other experts said there was no need to worry.

“On a normal day, your pets don’t try to look at the sun, and therefore don’t damage their eyes.  And on this day, they’re not going to do it, either,” Angela Speck, director of astronomy and a professor of astrophysics at the University of Missouri, said at a news conference with NASA on June 21 in Washington, D.C.

“It’s not a concern, letting them [pets] outside,” Speck said. “I’m not going to worry about my cat.”

However, Speck noted that the eclipse might affect the behavior of certain animals. For instance, as the sky darkens, farm animals such as cattle may think nighttime is approaching and thus may decide to head back to the barn, she said.

In addition, insects and frogs might start chirping, just as they do during dusk on summer nights. Birds may also be fooled into thinking it’s nightfall, and may start “making lots of noise [to] show you that they’re getting ready to go to bed,” Speck said. [Sleep Tight! Snoozing Animals Gallery]

Even certain plants may furl or unfurl, just as they regularly do as darkness falls, she said.

Sources: Can Your Pet Go Blind from the Solar Eclipse?