Can pets get or spread Ebola?

Categories: Pet News
Comments Off on Can pets get or spread Ebola? 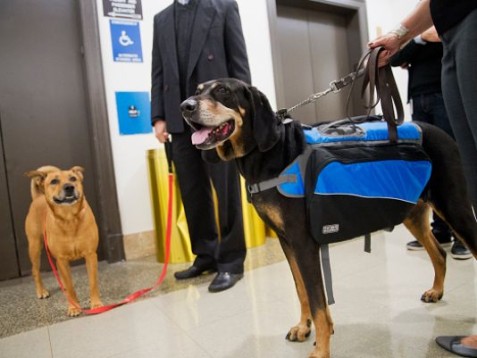 JACKSONVILLE, Fla. — The Ebola virus concerns do not stop with humans. Pet owners want to know if their animals can catch or transmit Ebola.

Two local Jacksonville Veterinarians along with the Centers for Disease Control and Florida Veterinary Medical Association says there is no need to be overly concerned when it comes to your pets.

Dr. Craig Sandler is a Veterinarian with Lakewood Animal Clinic. He says there have been no reports of pets becoming sick with Ebola or of playing a role in transmission of Ebola to humans.

“As far we know, no dogs or cats have gotten sick from Ebola,” said Dr. Sandler. “Even in West Africa, there have been no reported cases of dogs or cats getting the Ebola virus or at least getting sick from it.”

It turns out the risk for pets is low. If there is a pet in the home of an Ebola patient, the CDC recommends that public health officials in collaboration with veterinarians, evaluate its risk of exposure (close contact and exposure to blood or body fluids of an Ebola patient).

“As far as we know they don’t become symptomatic and they cannot spread it,” said Dr. Sandler.

Dr. Tim Holloway from Southside Animal clinic agrees, there is no cause for alarm.

“As far as we know there has been no research that links Ebola to our cats or dogs,” said Dr. Holloway.

In fact, studies from outbreak areas in Africa found that dogs can have antibodies which show they have been exposed to Ebola but they cannot pass the virus along.

“If you have not been exposed to the Ebola virus then your dog can’t get it. And, even if you have been exposed…the chances of your dog getting it are not very likely,” said Dr. Sandler.

Officials in Dallas who diagnosed the 26-year-old Nurse with Ebola made sure her pet dog was placed in isolation. Veterinarians says this is right thing to do…based on what we know from humans.

While dogs and cats cannot transmit the Ebola virus, mammals have shown the ability to become infected with and spread the virus. These mammals include humans, bats, monkeys and apes.

Right now, the CDC is keeping a close eye on fruit bats.

“The CDC believes they could be the natural reservoir for Ebola,” said Dr. Sanders.

The big questions: Should we be concerned here on American soil?

“At this point, there is really not that much concern with those types of animals,” said Dr. Holloway. “The bats here… [not Ebola] but they do carry other diseases so we should exercise caution…they carry things like rabies.”

And, what about mosquitoes? According to the Florida Veterinary Medical Association there is no evidence that mosquitoes and other insects can transmit the Ebola virus.

For more info on pets and the Ebola Virus: CLICK HERE

via Can pets get or spread Ebola?.