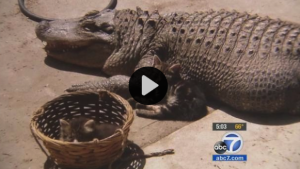 VAN NUYS, LOS ANGELES (KABC) — It was an open secret in the neighborhood that an 8-foot alligator was living at a Van Nuys house, along with many wild cats, but all it took was one unhappy neighbor to get the alligator out of there.

Authorities say the investigation began in late 2014 when animal control was alerted to a possible alligator in the 13200 block of Sylvan Street. Officers searched the property but did not find anything.

On Monday, animal control officers served a search warrant at the home and located the female alligator, named Jaxson, in a covered box in the yard.

It is illegal to keep wildlife without a permit in L.A. A criminal investigation is now underway, and a case is expected to be presented to the city attorney’s office for prosecution.

Animal authorities believe that the gator was being fed cats because several dead cats were found nearby. Jaxson’s owners say they fed the cats, they didn’t feed the cats to Jaxson, who ate nothing but chicken.

“Now we lost the alligator. And now they’re making statements that shouldn’t be making because nobody’s feeding cats to the alligator. We got plenty of money to feed whatever we have to feed,” Gorecki said.

“These type of reptiles can be dangerous,” said Mark Salazar, department of animal services field commander. “If anyone is housing an animal like this … turn the animal in, contact the local zoo.”