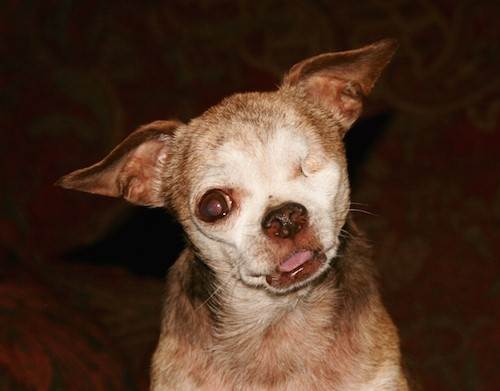 Harley the dog is almost impossibly small. He’s missing an eye, his legs are deformed and his tongue sticks out of his mouth because most of his teeth had to be removed. But Harley is more than a survivor — he’s a hero.The tiny Chihuahua received a huge standing ovation Saturday night at a black-tie gala in Beverly Hills, where he was named American Humane Association’s 2015 American Hero Dog.American Humane AssociationA little dog named Harley got big recognition at the 2015 Hero Dog Awards.”It was just four years ago that he was pulled from the cage in the puppy mill and left to die,” Harley’s owner, Rudi Taylor, said on stage during the emotional awards show. “We never would have ever thought he would live this long and make such a difference for so many puppies.”Harley spent the first 10 years of his life living in a cage in a commercial dog-breeding operation before volunteers with National Mill Dog Rescue scooped him up and gave him much-needed veterinary care. His rescuers and veterinarian said that, like many puppy mill dogs, Harley likely lost his eye when his cage got power-washed with him inside it. The battered little dog had a host of other ailments, including a broken tail, gnarled toes, infected teeth and heart disease.Rudi Taylor, 54, and Dan Taylor, 60, of Berthoud, Colorado adopted Harley in 2011 with the understanding that he might live two to three months tops. But the little dog kept thriving and enjoying life so much that Rudi Taylor decided to start a Facebook page for Harley “Freight Train” Taylor.Since then, the 6-pound Chihuahua has become the mascot for a “Harley to the Rescue” campaign, which has raised money to help National Mill Dog Rescue save and care for more than 500 dogs to date.Lori FusaroRudi and Dan Taylor appear on stage at the 2015 Hero Dog Awards with their tiny dog, Harley.”Harley survived in hell for 10 years and there’s only one thing that allows the spirit to do that, and that’s to be indomitable,” Dan Taylor said on stage Saturday night as Rudi stood beside him, crying and cradling 14-year-old Harley in her arms. “That spirit is allowing him now to be the voice for dogs who cannot speak for themselves… and give everybody hope that tomorrow’s going to be a better day.”One of eight finalists for the American Hero Dog distinction, Harley represented the “emerging hero dog” category for ordinary dogs who do extraordinary things. All eight dogs were honored at the awards show, which was hosted by TV personality, author and animal advocate Beth Stern and television and film star James Denton at the Beverly Hilton Hotel. Other 2015 hero dogs include:Search and rescue dog: Glory