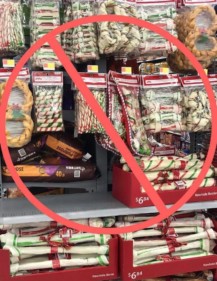 With Christmas around the corner many stores across Western Montana are selling colorful festive dog treats. However, according to one dog expert, the dyed treats may be poisonous to pets.

Red and green festive dog treats are common in big box stores, and while they look harmless for pets, the treats are difficult for dogs to digest.

According to pet trainer and former veterinary technician Sarah Spencer Hall, testing on the colorful snacks have shown traces of arsenic, mercury and other toxic chemicals. Spencer Hall said she’s seen many cases of the treats harming dogs.

“If they’re swallowing big chunks of [the treats], that stuff isn’t going to digest. It’s going to sit there or get stuck somewhere in [a dog’s] digestive track,” Spencer Hall said. “When I worked at the veterinary clinic, I saw lots of dogs that had to have surgeries to remove that. They have to cut their stomach open and go in, find [the treat pieces] and bring it all out.”

Spencer Hall adds the treats are often made from cattle or horse hides that are often washed with hydrogen peroxide to give a white “pure” look, and to remove the smells from it.

She said the hydrogen peroxide is commonly used to make dogs vomit up poisons but it can cause lasting damager to the intestines.