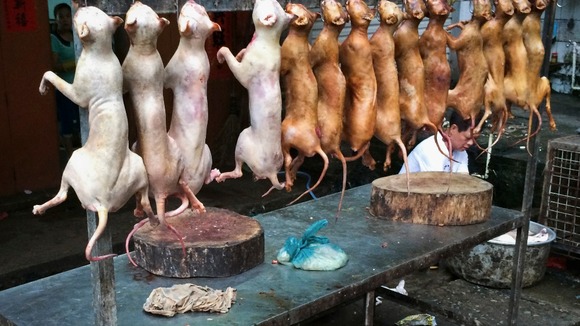 Grossed out at the thought of eating dog?

Serving up a dish of man’s best friend is a cultural taboo in the U.S. that would bring PETA protestors to your doorstep faster than you say bow wow.  But while only only a handful of states that actually have laws on the books that ban the practice, in many states, like Pennsylvania for example, it’s still legal to sell and eat dogs and cats.

Yet, in some parts of the world, these animals are often on the menu. If you don’t fancy trying a meat that could have been a cuddly pet, proceed with caution when exploring local dishes in the following countries.

Dogs for sale at meat market in before dog meat festival in Yulin. (Reuters)

Dog meat has long history in Chinese cuisine and the practice of cooking with it continues today in many regions. While the country has at time curtailed its sale (the government banned the sale of dog meat at local restaurants during the Beijing Olympics), it’s still common to see dog hanging in the country’s many wet markets.

Dog meat is a common dish in this West African nation. Some believe that eating dog helps build immunity to disease. People have reportedly been gorging on suya, grilled meat often made from dog, to protect against the Ebola outbreak, despite health official warnings. It’s also believed that eating dog may also improve one’s sex life.

While dogs are usually used for sledding through the icy tundra, when the meat supply is running low those that live in the Arctic, Greenland and other cold-climate countries will turn to dog meat as a source of protein.

Slaughtered dogs are prepared for sale in Duong Noi, a small village in Vietnam. (Reuters)

Dog eating a common practice in many Vietnamese homes and restaurants. “Dog is the go-to dish in Vietnam for drinking parties, family reunions and special occasions,” according to the Guardian. Unfortunately, demand for the meat has gotten so high that an underground smuggling operation out of Thailand has been snatching pets and street dogs to sell on the lucrative meat market.

While many people often associate eating dogs with Asian or African cuisine, the practice is still common among farmers in Appenzell and St. Gallen districts of the country. The practice is legal as long as the animal is killed humanely and the meat is not sold for commercial purposes.

While dog is considered taboo to eat (along with pigs) in this predominantly Muslim country, the meat is consumed at special occasions such as weddings or holidays.

(Visited 1,322 times, 1 visits today)
Tags: countries that eat dogs pet news pets on board
« 21 Before And After Photos Of Dogs Growing Up | Bored Panda
Ways to Help Lonely Pets »